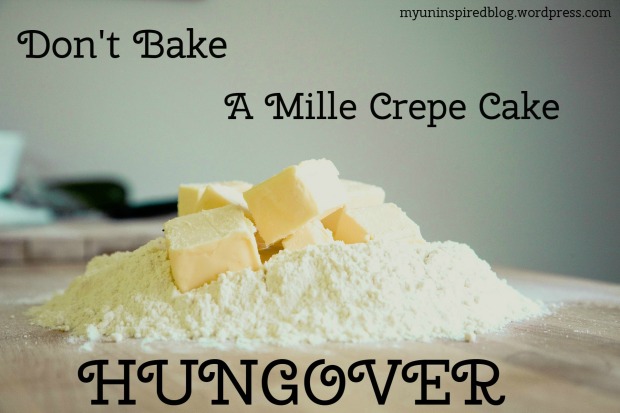 Ooh, the Food Files. So catchy. So alliteration-y.

Fun fact: It’s called a Mille Crepe Cake because in French, mille means a thousand. It literally means thousand crepe cake. I should’ve maybe picked up on that, because Mille actually means the same in Italian, but I figured it was a cooking term. Ya learn something new every day.

Side Note: I was feeling like it was silly that we use the word thousand for the three-zero number when it seemed like everyone else used some variation of what we use for the six-zero number. But there’s this cool website called indifferentlanguages.com where you can type any word and it tells you how to say it in like a hundred different languages. Turns out, there are several European countries who use some version of the word thousand for the three-zero number as well. German, Norwegian, and Danish to name a few. Pretty cool.

Anyway, I baked this cake for New Year’s Eve. Happy New Year, by the way! I had been seeing it all over the Internet, mostly because I follow Tasty on all different websites all over the Internet. So, I finally decided to try it. Here’s the recipe, written by me, copied from Tasty’s website:

I googled why the ingredients should be room temperature, because it seems like one of those things where we don’t and say we did. However, I learned that ingredients at room temperature trap air better, so when the item is baking, the air expands and creates a fluffier baked good. I felt this cake should be pretty fluffy, so I waited as long as my short little patience meter could handle before I started baking while everything was still chilly anyway.

I also googled why people “sift” things, and that’s just so that everything blends more evenly. I totally *did* that. Uh huh. I totally own something that sifts things.

There were two things that made this project exceedingly difficult. The first was that I had to make it in a freakin’ wok because that was the only nonstick pan in the house. Otherwise, I would’ve had to spray the pan between every crepe, and they would’ve been greasy.

The second problem was that Cool Whip does not like hot crepes. It melts, and then your layers slide, and then you cry because you put in three hours of damn work on this stupid ass cake and the layers are sliding. This should have been obvious, but it would have taken five forevers to bake this cake that way. If I were to do this again, (which I will not) I would make all the crepes, store them in the fridge for a bit, and then layer them. In any event, here’s how the project goes, in much closer to real time.

You crack your dozen eggs, which is kinda gross.

Then you add your milk, butter, sugar, vanilla, and you get this mixture with this weird lumpy consistency. Turns out, that lumpiness is fat, which makes me pretty nauseous considering I’m writing this while substantially hungover. 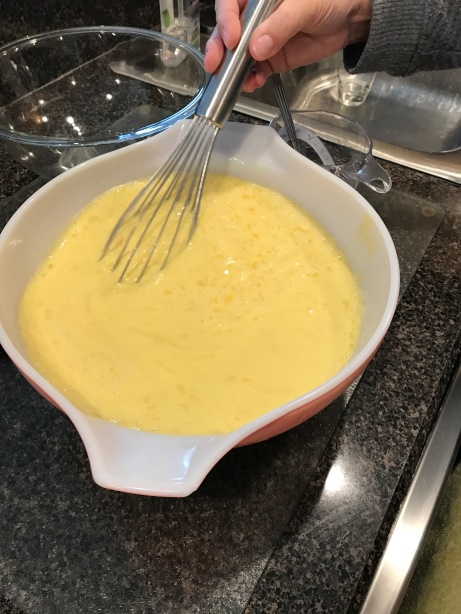 Don’t you worry though, it all gets strained out. 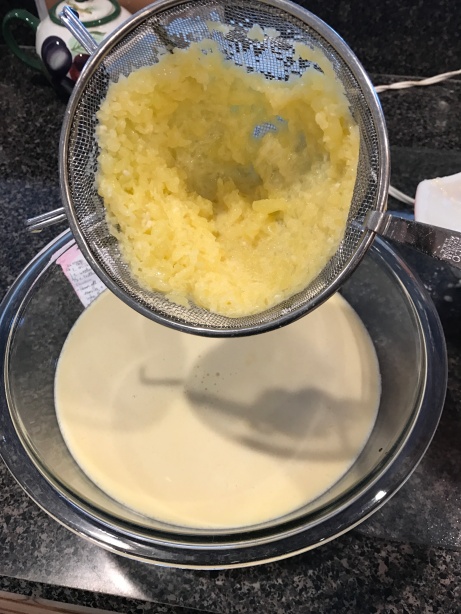 Now you’ve got your bowl of batter, and then you split it into two bowls so you can add your chocolate powder to one of them. Then, you can make your crepes.

Mine were pretty dense, which might be because I didn’t wait for the ingredients to get to room temperature. Can’t say they didn’t warn me. However, they were still tasty.

Then it was time for the layering, which was a bitch and a half. Like I said, I should’ve waited for them to cool completely before I put the Cool Whip in, because the Cool Whip melted and I had slidey layers and a giant mess. I ended up stopping in the middle and putting it in the fridge. When it had solidified some, I took the whole thing apart and restructured the layers so they were actually on top of each other, then finished it up. In the end, it was smaller than I imagined, so I garnished it with some berries, but it actually looked really nice. Still wouldn’t do it again, but it didn’t look like an awful disaster. (Okay maybe the inside didn’t look as perfect and awesome as the video but it doesn’t look like an awful disaster). 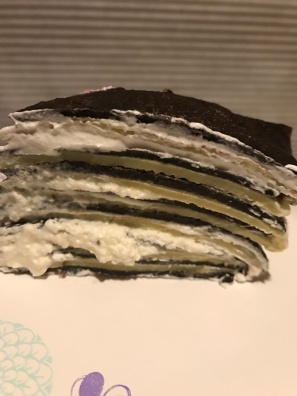 What did you guys do to ring in the new year? Did you go to a bar or club? Family party like me? Did you sit home and eat chinese food and drink champagne like I wish I did? Let me know! And fingers crossed that this year makes up for the terrible mess we just left.

Shout it from the rooftops!